Thanksgiving has always been a time to focus on gratitude, abundance, and joy. That begins a Christmas, Chanukah, Kwanzaa, Holiday Season which also has a foundation in abundance and joy. This year (2020) we face challenges that we have not had before. Many usual abundant celebrations seem restricted, less, or fragmented ... that seems to speak of lack. Yet it is still the ACIM student's challenge to understand that perceptions of lack are "faulty" or broken. Abundance or wholeness is the only ground of being that is a reflection of eternal truth. "42. Wholeness is the perceptual content of miracles. It thus corrects or atones for the faulty perception of lack anywhere." (OrEd.Tx.1.61) Let's look at some practical ways to see wholeness and abundance in the midst of a holiday season challenging us with lack, loss, and fragmentation. Let's manifest abundance miracles instead.

Dear A Course in Miracles Students,
I am happy to announce that the Sparkly version of ACIM is in the process of resurrection. "WooHoo!" Based on the early copy of ACIM found in the Edgar Cayce library during the copyright trials (~1996) the version of ACIM affectionately named "The Sparkly" (because of it's unique cover) is having new life breathed into it. It has been out of print for about 5 years. Published by Ted Poppe and Diamond Clear Vision press The Sparkly was long the least expensive ACIM available and in fact ~20,000 were given away free to anyone who asked for one. While the cover was a bit controversial (just not formal enough for some purists) I (Rev. Tony) always LOVED it. A special Sparkly resurrection and fund raising event will be held on Saturday December 5 through Zoom & Facebook Live.
There will be: music, talk, and MIRACLE inspiration.

11.15.20 Video "Challenges Being a Miracle Teacher and Healer"

I realized recently that my main job, while functioning in my role as miracle teacher and healer, was to keep students trusting in the process, to keep them engaged. Some students drop out of dedication to the ACIM discipline at the exact moment when they should actually be increasing their engagement time and practice dedication. Some form of fear gets the better of them (literally). However we all have to be "... willing to follow the Holy Spirit through seeming terror .... You are severely tempted to abandon Him at the outside ring of fear, but He would lead you safely through and far beyond." (OrEd.Tx.18.87) There is a ring of fear or fire at the foundation of the world illusion. As we approach our center we have to pass through it. Keep trusting both your own path and instill that trust in the people you influence.

Now that the 2020 presidential election is over (sort of) I feel that we are entering a new time of healing. Regardless of what our political views are, and who we wanted to win the election, it is the time for all of us Miracle Workers to rise above the current "battleground" and let the healing energy flow through the American society. It is actually easier to do than many realize because Holy Spirit is always providing the perspective from above the battleground. "The overlooking of the battleground is now your purpose." (OrEd.Tx.23.50)

In the midst of abundant miracles this week (literally) I found myself strangely confronting thoughts of discouragement. On one level I knew this was my ego reacting to the miracles that were happening. ACIM tells us that the ego switches from suspiciousness to viciousness when it is severely challenged, and the discouragement was actually an indication that I was making fast spiritual progress. I was also comforted by this thought, "If the way seems long, let him be content. He has decided on the direction he will take. What more was asked of him?" (OrEd.Mn.22.2) I know which way to go, and I was heading in the right direction. That was all that was required. What a comfort it is to be able to declare this confidently. However the miracle was remembering that the healing is happening NOW and actually not in the future at all. "One source of perceived discouragement from which you suffer is your belief that this takes time, and that the results of the Holy Spirit's teaching are far in the future. This is not so." (OrEd.Tx15.2)

ACIM talks a lot about insanity. The ego voice in our minds is COMPLETELY insane. Many still identify with it, and ACIM students still have to deal with it -- but hopefully with the help of the Holy Spirit, so we ARE making progress. ACIM tells us, "You are no longer wholly insane, nor no longer alone." (OrEd.Tx.17.73) (I aways laughs at his. Is this really a complement?) I will embrace this! Why should YOU come to the Sunday Gathering and listen to me, Rev. Tony? Because I am not longer WHOLLY insane! LOL!! Plus it's a great way to prove we are not alone. I have let go of loneliness and insanity and I challenge you to join me. 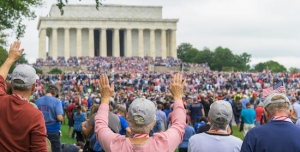 Dear CMC Friends and Family,
Seems like spiritual and religious people have a lot to say these days. Last week I talked about San Francisco's ArchBishop Cordileone organizing large protests against church discrimination during pandemic restrictions. Just today I heard about the huge prayer rally named "Prayer March 2020" that took place last Sat. Sep. 26, 2020 on the National Mall in Washington DC. Estimates are that about 50,000 people took part. To be able to get crowds like this while still in a Pandemic is noteworthy. It was organized by Franklin Graham who now heads the "Billy Graham Evangelistic Association." This is Billy Graham's son.
They were praying for healing of the political divide between Democrats and Republicans. We certainly could use it. They were also praying for healing from the Covid19 pandemic. They stopped at 7 different, key points on the National Mall to say prayers. "Prayer is the medium of miracles. Prayer is the natural communication of the created with the Creator. Through prayer love is received, and through miracles love is expressed." (OrEd.Tx.1.11) See them below in front of the Lincoln Memorial. I support my traditional religious brothers, sisters, and others. While their faith is not exactly like mine, I found much to agree with in their belief in the healing power of prayer.
(originally appeared in Miracles Weekly #261, Sep. 30 2020)
Published in CMC Active Ministers
Read more...
Tuesday, 22 September 2020 06:41

Wow! This Shit Is Getting Real! 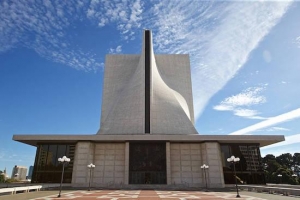 Dear CMC Friends and Family,
I live in San Francisco, California and the CMC main office has always been here as well. While we have a global outreach, we have "roots" in San Francisco and a strong connection to the liberal, alternative lifestyle of San Francisco has frequently found it's way into our public messages. This past week the Roman Catholic ArchBishop of San Francisco, Salvatore Cordileone, who presides over the huge, modern Saint Mary's Cathedral (right in the center of the city) got very active in calling his Catholic faithful to publicly protest the city of San Francisco and Mayor London Breed about their "discrimination" (his stressed word) of churches in general and ArchBishop Cordileone's Roman Catholic faithful in specific. Their banners read, "We Are Essential: Free the Mass" (in 3 languages).
While many businesses in San Francisco have opened with "Shelter-in-Place" guidelines, churches have been last on the list to be allowed to reopen and with stricter guidelines than other businesses have had to comply with. The issue at stake is religious freedom and 1st Amendment rights. I side with Rev. Cordileone on this, and I think A Course In Miracles supports this "defense of freedom" protest for religious assembly. "Yet the argument that underlies the defense of freedom is perfectly valid. Because it is true, it should not be fought for, but it should be sided with." (OrEd.Tx.7.11) I have never seen the San Francisco Catholic Church get political like this before. My first thought was, "Wow! This shit is getting real!!"
(originally appeared in Miracles Weekly #260, Sep. 22 2020)
Published in CMC Active Ministers
Read more...
Sunday, 20 September 2020 12:00

This past Tuesday we had a milestone. It was a full 6 months, half a year, 26 weeks, of being under an emergency "Shelter-In-Place" order in the city and county of San Francisco. Our order started Tuesday March 17. Yet I felt something else happening. I felt the Pandemic healing on multiple fronts. More and more things are opening up. Gyms are now opened. Hair salons can now see customers inside. Professional sports is back. Our fine San Francisco Museums are scheduled to open next week. These are outer manifestations of what I am sensing intuitively with my connection to Holy Spirit. The fear is ratcheting down. "The only thing that is required for a healing is a lack of fear. The fearful are not healed and cannot heal." (OrEd.Tx.27.45) The pandemic is healing. 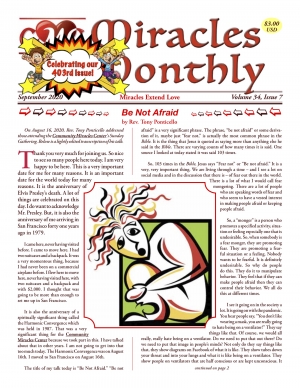 Dear CMC Friends and Family,
Friday Rev. David (my wonderful office assistant)and I finished putting together Miracles Monthly, September 2020, Volume 34 Issue 7, our 403rd issue in 403 months. I mailed it yesterday, Monday, (Our first issue was March of 1987). What a miracle this is. When I consider all that we have gone through in these 34 plus years and how we still got an issue out every month!!! So much had to healed, so many times, just to get the next issue done. So many times it was "late," sometimes very late, but we never gave up and we always caught up.
My feature article this issue is *Be Not Afraid* which is such a key idea for healing. "The only thing that is required for a healing is a lack of fear. The fearful are not healed and cannot heal." (OrEd.Tx.27.45) What fearful thoughts might occasionally cross your mind: Covid19, wild fires on the West Coast, unhealthy air quality, who might get elected U.S.A. President in November ... ? Let them go and heal. "There is nothing to fear." (OrEd.WkBk.48)
(originally appeared in Miracles Weekly #259, Sep. 15 2020)
Published in CMC Active Ministers
Read more...
Sunday, 06 September 2020 12:00

It's Labor Day weekend 2020. On the level of form the country can celebrate that unemployment has declined. On Friday the Bureau of Labor Statistics announced an August unemployment rate of 8.4. It was 14.7 in April. Many people still have their self worth tied up with their work, labor, or vocation. ACIM calls us all to a true vocation, healing our mind by restoring integration and oneness. Our vocation then involves extending this healing to others. "What better vocation could there be for any part of the Kingdom than to restore it to the perfect integration that can make it whole?" (OrEd.Tx.5.28) Join us Sunday to celebrate true vocation and a new vision for Labor Day.

I have noticed that there is lots of fear mongering going on in our culture from all sides. "Monger" means "a person who promotes a specified activity, situation, or feeling, especially one that is undesirable or discreditable." We, as ACIM students, never want to fear monger. We want to spread words of: hope, peace, strength, and bliss! That's why I like the exclamation "WooHoo!!" It sums us all four of those traits. "Make no one fearful, for his guilt is yours." (OrEd.Tx.13.12) Obviously guilt and fear are the same thing. In these challenging times can we stop our guilt and fear mongering and move to "WooHoo"? That is our challenge.