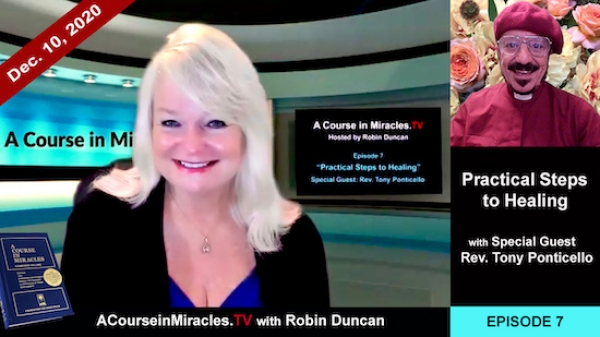 Dear A Course in Miracles Students,
I am excited to report that I have collaborated with two other ACIM content providers to produce two different video "TV" programs. The first will be shown Thu. Dec. 10 and the second will be shown Fri. Dec. 11. Hey I'm in demand! The shows have entirely different topics, so plan to watch them both. Both will be available after their premiers for later and multiple viewings. Please forward this email to all your ACIM friends. (Look there's an angel over my shoulder!)
Thu. Dec. 10 ... and after
1) A Course In Miracles TV with Robin Duncan (see below)
3:00pm Eastern / 2:00pm Central / 1:00pm Mountain / 12noon Pacific
Practical Steps to Healing
This is a prerecorded and edited hour long interview with Robin. We covered:
Premiers Thu. Dec. 10, 9 am Eastern, on Robin's web site and YouTube channel:

More in this category: « Another Guest "TV" Appearances for Rev. Tony 12.13.20 Video "Let There Be the Light of Chanukah" »
back to top