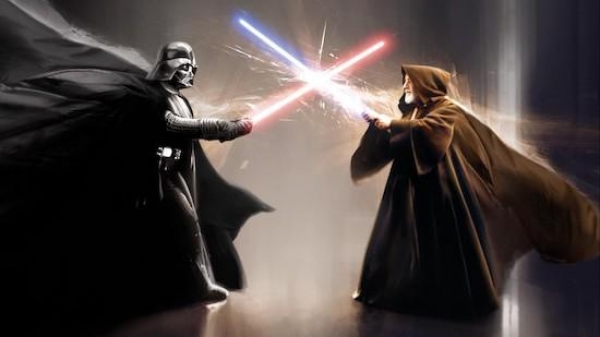 In the first Star Wars movie, Luke, Han Solo, Chewy, C-3PO, R2-D2, and Obi-Wan Kenobi join together to rescue Princess Leia from Darth Vader, who is holding her captive. But as they speed through space and approach Vader’s Death Star, their ship, the Millennium Falcon, is caught in the Death Star’s tractor beam and slowly pulled inside the giant ship. They hide in secret places, then sneak out to find Leia. Obi-Wan, however, breaks off from the group to disable the tractor beam. On the way, he encounters Darth Vader.

Darth Vader – keeper of the “dark side” of the Force squares off against Obi-Wan – Jedi Knight of the Light. They battle fiercely until that moment when Obi-Wan stands in front of Vader and lowers his light saber. “If you strike me down,” he says, “I shall become more powerful than you can possibly imagine.” Vader cuts him in half but Obi-Wan’s body disappears leaving only a cloak in a pile on the floor.

I thought of this and of those who have been studying the Course for years. Clearly we are “experts” in one sense. We know what it says, we understand what it means, and our lives have been transformed as a result. But, in another sense, we are just as newbie as everyone else. Because if we really got it, really understood who we were, we wouldn’t still be here.

Think about it, once Jesus figured it out, he didn’t stick around for very long. He knew his power and communication would only increase upon his leaving. Like Obi-Wan, Jesus became more powerful than the forces of dark could ever imagine. “Nothing can prevail against a Son of God who commends his Spirit into the hands of his Father.” (OrEd.Tx.3.19)

Deb Canja is a spiritual teacher dedicated to removing the obstacles that prevent us from experiencing self-love and inner peace. She was ordained on Aug. 22, 2020, as the CMC's 122nd Minister. She serves on the CMC Board of Directors and teaches a class focused on the ACIM Text using the Circle of Atonement edition. Deb has spent years studying many spiritual masters and healers and knows that the key to realizing a life of joy, abundance and success is already within each of us. She helps others find their path to success and happiness with gentle guidance and a few simple strategies that build bridges to inner wisdom and connection to the truth of who they are.

Deb is also the founder and CEO of Bridges4Kids, a national, non-profit organization providing online information for parents and professionals seeking help for kids from birth through college. Prior to founding Bridges4Kids, she served as the Executive Director of Michigan’s Parent Training and Information Center where she used her legal background in civil rights to teach parents how to successfully advocate for children with special needs.

At 15 she was led to the decision to become a lawyer dedicated to working within government to bring about positive change from the inside out. As a Michigan Assistant Attorney General, and later a Deputy General Counsel, she protected the public by regulating insurance and lending services, and by defending laws that protect consumers.

She also served as a volunteer, elected trustee of a large community college and championed programs to make education affordable and accessible for all.

A best-selling author, her first book was written with her mother Tess, about helping adults discover how to encourage a success mindset in young boys. Swim the Lake Before You Row the Boat describes how to awaken a boy’s success identity, unleash his confidence and give him the foundation for a great life. At the same time, it encourages parents, grandparents, teachers, coaches and mentors to lighten up on themselves, embrace do-overs, and focus their efforts where it really matters. She is also a contributor to two other best-selling books, The Success Code: Ordinary Habits/ Extraordinary Results, and Transforming Your Life, Vol. 3.

More in this category: « Happy and In Love Again Motivation »
back to top