The Magic of Simon and Miracles

Dwelling oriented spirituality is consistent with the traditional, highly systematized approach through established religious institutions, structures, and/or denominations. The foundation of spiritual life is built on "lifelong membership in a church or other religious institution, going to religious services, performing the rites, following the rules and filling a role in the community." Seeking oriented spirituality emphasizes an ongoing search for experiences of the divine through diverse approaches that may include attending different churches or religious institutions, reading spiritual books, attending workshops and support groups, visiting spiritual teachers and healers, and/or seeking experiences that contribute to the inner journey. Individuals engaged in the third type, practice oriented spirituality, may belong to a larger community of practitioners who engage in "regular intentional activities meant to deepen one's relationship with God through prayer, meditation, contemplation, the study of sacred texts, devotional reading and service."

Over the course of my life, I have engaged at some level in each of these types of spirituality. My membership in the Community Miracles Center and status as a student of A Course in Miracles (ACIM or the Course) might be deemed practice oriented spirituality. My status as a member of the Plymouth United Church of Christ in Detroit, MI would likely be considered engaging in dwelling oriented spirituality. I enjoy and am committed to both approaches. I am an ACIM-2 student at the CMC and attend church services regularly at Plymouth along with numerous volunteer activities there. I find it interesting to learn more about the Bible's teachings and to compare and contrast the sermon lessons with Course teachings. Earlier this year, the minister at Plymouth gave a sermon entitled, "The Power of the Holy Spirit." I was intrigued and interested to hear his teaching on this. Given the Holy Spirit's prominent role on our spiritual journey from a Course perspective, I was curious how this topic would be approached from a more traditional spiritual perspective.

The sermon was based on the story of the encounter of the Apostles Phillip, Peter, and John with the magician Simon in Acts 8:9-24. Following the Pentecost (the descent of the Holy Spirit on the Apostles), Phillip, and later John and Peter, travels to Samaria performing miracles — healing the sick and guiding the people in receiving the Holy Spirit. Simon Magus of Samaria, who is well known for his magical powers, is considered by the Samaritans as pocessing "the great power of God" hears Phillip's teaching on Jesus and sees the miracles he performed. Simon becomes a believer and begins to travel with Phillip. Peter and John arrive a bit later and once Simon observes the miracles they performe, he is so impressed that he askes if he could purchase this power that the Apostles have. Peter admonishes him strongly, and tells him that the power can not be purchased. At the story's end, Simon apologizes deeply, asks for forgiveness and for Peter to pray for him.

Simon was apparently endowed with some level of spiritual power and he used his spiritual power, or magical abilities, to acquire fame and admiration among the Samaritans. It is possible that he may have also achieved some level of physical wealth from "performing" magic. It is mentioned in the Biblical text that he was viewed as powerful. However, his abilities pale when compared to the healings and laying on of hands performed by the Apostles that accompanies the sharing of the teachings of Jesus. This illustrates Simon's inappropriate uses of, and inappropriate motivation for acquiring spiritual power and working miracles. In the words of my minister, "Simon is exposed as not as powerful as once thought."

But to Simon's credit, he is able to recognize true power — that of the Holy Spirit as demonstrated by the Apostles through their ability to heal. In the sermon's words, "When you tap into the power of the Holy Spirit, it will make you stronger, smarter, more loving, a complete person. Spiritual power is increased by a selfless willingness to help others with their problems" as was demonstrated by the actions of the Apostles.

The sermon proceeded to address how Simon cheapened his faith by using inappropriate means to acquire spiritual power — by trying to buy it. These efforts may have also been an attempt by Simon to regain his earlier fame by harnessing the power of the Holy Spirit for healing that clearly surpassed the magical accomplishments he previously demonstrated. The sermon at this point emphasized that great power is earned not bought and that spiritual power comes from extending yourself — loving your neighbor as yourself, and loving your enemies. The sermon ended with, "The power of the Holy Spirit will lead, guide, inform and protect you and keep you always in the care of the Lord."

The sermon's concluding thought regarding the power of the Holy Spirit resonates with the positive messages regarding the role of the Holy Spirit in our lives from a Course perspective. But the Course broadens our understanding of miracles, miracle-working, the inner Source of spiritual power and our relationship with the Holy Spirit. The teachings of the Course add wonderful depth and dimension to the insights that can be gained from the story of Simon Magus starting with how miracles should function in our lives.

The Bible attributes miracle working power to the Holy Spirit. The events that include the story of Simon occurred in the Book of Acts that follow the Pentecost or the descent of the Holy Spirit upon the Apostles. The Bible and the Course are consistent in this particular sense. As is described in Miracle Principle 39 — "The Spiritual Eye [the Holy Spirit] is the mechanism of miracles because what It perceives is true. It perceives both the creations of God and the creations of man. Among the creations of man, It can also separate the true from the false by Its ability to perceive totally rather than selectively." (OrEd.Tx.1.56) Within the story of Simon, we can observe additional consistencies with the Course's teaching on miracles.

We see in the healings and miracles that the Apostles perform alignment with Principles 5 and 14. Principle 5 states, "Miracles are habits and should be involuntary. They should not be under conscious control." (OrEd.Tx.1.5) The Apostles are spreading the teachings of Jesus and are traveling through the countryside spreading the message to all. Their actions are applied to all people they meet. There is no indication that their healings are reserved for specific types of worshippers or followers. Principle 14 states, "Miracles bear witness to truth. They are convincing because they arise from conviction. Without conviction they deteriorate into magic." (OrEd.Tx.1.14) We might speculate that this is possibly one of the reasons that the Apostle's miracles surpass the "magic" Simon has been performing and have greater impact on those who were healed. Simon appears to realize this, stops performing his magic, and begins to follow the Apostles.

Simon stumbles when he attempts to purchase the miracle working abilities of the Apostles. While the Bible states he was baptized, it is unclear that he is guided by the same devotion to the teachings of Jesus and the altruistic motives exemplified by the Apostles. He may have even been trying to regain his earlier stature in the community as he was described as a "great man" before the Apostles arrived in Samaria. Contrary to Simon's use of magic to support himself and earn accolades from the community, the teaching in Principle 18 directly refutes the use of miracles for personal gain. It states, "A miracle is a service. It is the maximal service one individual can render another. It is a way of loving your neighbor as yourself. The doer recognizes his own and his neighbor's inestimable worth simultaneously." (OrEd.Tx.1.18) Principle 10 further clarifies how miracles should not be used. "The use of miracles as spectacles to induce belief is wrong, or better, is a misunderstanding of their purpose. They are really used for and by believers." (OrEd.Tx.1.10) This is further emphasized in Principle 31 "Miracles should inspire gratitude not awe" (OrEd.Tx.1.42) and Principle 48 "Awe is an inappropriate response to miracles." (OrEd.Tx.1.76)

In his essay, "Miracles in A Course in Miracles," Robert Perry offers additional insight into the differences between traditional miracles often described in the Bible and the Course's teaching on miracles. He states, "the relationship between the Course's miracle and the traditional miracle can be summed up very simply as ‘same form, different content.'" Course miracles and traditional miracles are similar in form since both involve an interaction between a miracle worker and miracle receiver. The difference in content arises from the Course's emphasis on the miracle worker's mind perceiving beyond healing the physical characteristics of the person or situation (disease, inequality and separation) to include forgiveness, true perception, and the holy instant. In this broader view, miracles can be used to heal any problem — physical, emotional, mental, and interpersonal and that the Source of miracle working power resides within all of us. We can see from this and the sermon based on the story of Simon Magus the ways the Course extends the meaning and use of miracles beyond just physical healing and how the Course can also provide added insight into the stories and lessons of the Bible. ♥ 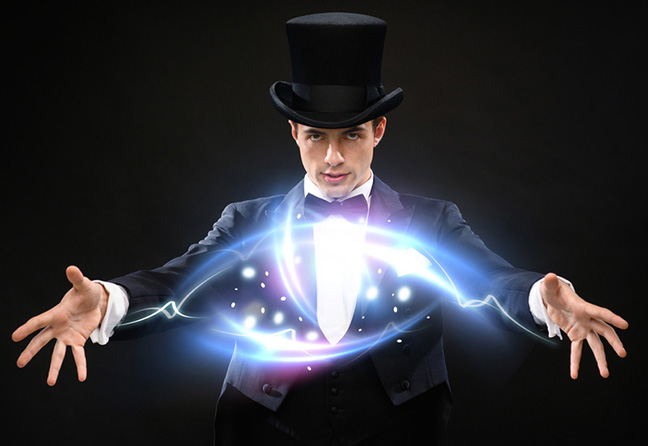 This article appeared in the August 2016 (Vol. 30 No. 6) issue of Miracles Monthly. Miracles Monthly is published by Community Miracles Center in San Francisco, CA. CMC is supported solely by people just like you who: become CMC Supporting Members, Give Donations and Purchase Books and Products through us.

We have 197 guests and no members online