Who Was Ken Wapnick? 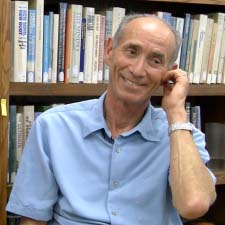 Kenneth Wapnick Ph.D., a well known A Course In Miracles (ACIM) teacher and author, made his transition from earth life on December 27, 2013. He was 71 years old and had been dealing with lung cancer for the past few months. The news was released with a short announcement on the web site for his organization, the Foundation for ACIM (FACIM).

Dr. Wapnick has been a fixture in the A Course In Miracles movement since the highly regarded spiritual books were first published in 1976. He has been a continuous Board member of the Foundation for Inner Peace (FIP) who are the original publishers of the book. (FIP later transferred its copyrights for ACIM to Ken Wapnick's organization FACIM.) It was well known that Dr. Wapnick took a large role in the final editing and the preparation of the first ACIM books for printing and distribution.

Dr. Wapnick's first written work, Christian Psychology In ACIM, was originally published by FIP. However Dr. Wapnick soon started his own teaching organization, FACIM, with his wife Gloria in 1983 and took over all publishing of his written works. FACIM was first located in Crompond, NY. In 1988 FACIM moved into a much larger facility in the Catskill Mountains resort area of New York State, near the town of Roscoe. In 2001 FACIM moved to its current location in Temecula, CA.

Dr. Wapnick was a prolific ACIM author and a tireless Course teacher. The FACIM web site shows 31 individual, bound books currently being sold that he wrote. His classes and workshops held in the Roscoe and Temecula facilities were frequently sold out in advance. Many YouTube videos of Dr. Wapnick speaking continue to get numerous viewings, and he is referred to by many other ACIM authors and teachers as the foremost ACIM authority.

Controversy about Dr. Wapnick arose in the mid 1990s when a severe tightening of the previously loose copyright and use guidelines for ACIM was instituted by FIP. The words "A Course In Miracles" themselves, and the acronym "ACIM," were turned into legal trade/service marks and only FIP, FACIM, and thus Ken Wapnick, could use them indiscriminately. Many other ACIM authors and teachers objected to this because it effectively gave FIP, FACIM, and thus Ken Wapnick, a monopoly on ACIM teaching and writing. Also, a major lawsuit claiming copyright infringement was instituted by FIP with FACIM's support in 1996 which extended until 2003. FIP and FACIM lost this high profile case, with the result being that FIP and FACIM lost the initial and primary copyright for ACIM, and then later lost the ACIM trade/service marks. The vast majority of ACIM was thus released into the public domain after the lawsuit.

During the lawsuit, other earlier versions of ACIM were uncovered (some will say "stolen") that showed large amounts of early editing of ACIM had taken place, while FIP and FACIM representatives, including Ken Wapnick, had always claimed that the material was only very minimally edited, or virtually unedited. These earlier versions have now been published by other entities and ACIM students have options to choose from when buying an ACIM book.

Dr. Wapnick held to the position, to the end his earth life, that the work he had done to help bring ACIM into the world, including the editing, was always done with the scribe Helen Schucman's and Jesus' guidance, and that he stood behind the decisions that had been made. Many thousands of ACIM students continued to study with Dr. Wapnick after FIP/FACIM lost the lawsuit, and many of them sided with Dr. Wapnick and believe the other versions of ACIM are substandard, inferior, and were never intended to be published. Still, there is no doubt that the entire ACIM landscape changed during the copyright controversy, and the ACIM community has broadened in its beliefs and interpretations since then.

Ken Wapnick was extremely loved by many students and they feel that he was the one ACIM teacher who made the Course understandable for them. They will greatly miss him. Our love and light goes out to Dr. Wapnick's wife Gloria, his close family and friends, and to his dedicated students at this time of challenge.

© 2013, Rev. Tony Ponticello, San Francisco, CA.
No reprinting without the inclusion of this copyright statement. All rights reserved.